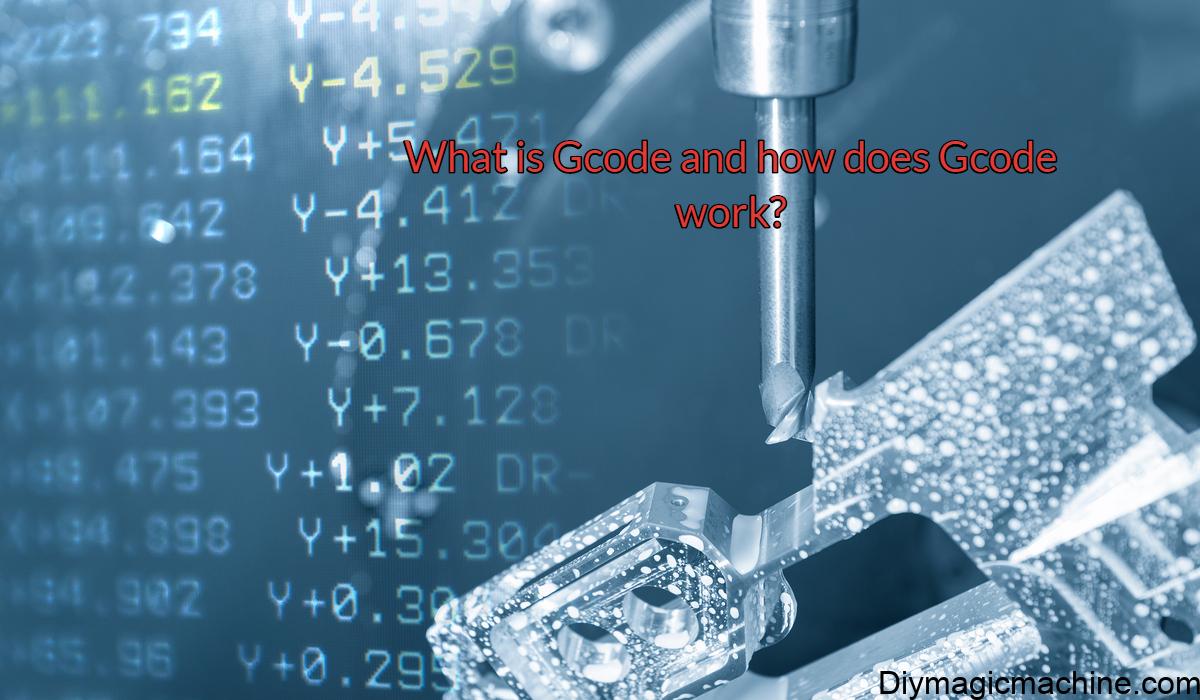 Have you ever at any time just sat and wondered how it is that machine tools can operate with high precision, cutting through solid materials and shaping them?

The answer is programming.

Programming works by a set of instructions being fed to a machine tool either directly through manual programming or a computer. The software in the device uses these instructions to perform the specific cutting tasks.

Manually programming a machine tool is challenging. Primarily because of the many calculations required to obtain the right variables in terms of direction, speed, time, and precision.

The introduction of Computer-Aided Manufacturing (CAM) programming software that creates G codes has been a massive relief for many tool manufacturers.

These G codes guide machine tools on the distance they need to move and at what speed.

Genetic code, commonly referred to by many people as G-code, is a computer language used to control the operations of (CNC) Computer Numerical Control machines that rely on computer programs to manage their activities.

We refer to it as G code because most of the codes used to write this program start with the letter G. RS-274D is the standard version of G codes.

Available-code programs have been written manually for the longest time.

The introduction of multi-functional machines that simultaneously perform a vast number of tasks has made manual programming challenging.

The first CNC program was developed in 1950 at the Massachusetts Institute of Technology.

Over the years, various organizations have made numerous adjustments, but what has remained constant despite all the changes in the use of G codes. The Electronic Industries Alliance adopted the most recent G code function in 1960.

The most common G codes application is machine tools designed to cut and shape metals and other solid materials.

With G code instructions, the cutting part of a machine is moved through a specific route removing all the unwanted stuff and leaving the desired end material.

Therefore, a G-code is a language that the CNC machines understand and rely on to perform operations effectively.

How does Gcode work?

For a G-code to operate successfully, there has to be a combination of a skilled operator.

They give instructions on how to manage the machine and the computer-aided manufacturing programs where the existing software develops the necessary variables needed by the CNC machine to cut the solid material. The CAM program is like manual programming in that there are clear instructions for each operation.

Computer-aided design and manufacturing software helps in creating the G codes. Due to the wide variety of software available, the different codes created coordinate specific tasks in the machine.

The computer running the system must receive the right instructions to perform the various functions. These are tasks in a machine tool that can be coordinated by issuing G code commands.

For the successful accomplishment of a cutting task, a series of different codes must be put together and work together. G codes work by guiding lines through different paths to various endpoints.

Different machines respond differently to the program, and they mostly come with an instruction manual explaining how to conduct the operations. Generally, the machine will respond to individual commands whereby the operator is tasked with identifying when to press the start button and instructing the machine tool to start an activity.

The machine continues with the process until the operator presses the stop button.

When you require to write continuous actions that the machine should perform, you should use canned cycles instead of individual actions.

In canned cycles, all the actions needed to perform one task get combined into one code.

A good example is a drilling operation. If you were to conduct the process by giving individual instructions, you would first have to instruct to move the tool to the point where the hole should start, second, offset the top surface, third, do the actual drilling, and the fourth action, to rapid out.

This means you will require four lines of G codes in the program to complete a drilling operation. On the other hand, the canned cycle can combine these four codes into a single code with all the motions needed to drill the hole.

The XYZ Cartesian coordinate system forms the basis of the CNC machines. It is used to determine the tools’ direction. The X coordinates are for the horizontal positioning while the Y-axis is for the vertical.

The Z coordinates will show how deep the tool can go.

To see how the three coordinates come about, you can place your right hand on a table and extend the thumb, middle finger, and the forefinger. The direction the thumb points to is the axis to the X coordinates, and the direction of the middle finger is the Y-axis point giving the Y coordinates. The middle finger shows the Z-axis. Bringing the machine to a home position involves finding an intersection point of the X, Y, and Z-axis, which is X0, Y0, Z0.

Despite the system being called G code, other letters exist in the program. They include:

If you look at a G code file for the first time and try to make sense of it, you may think it’s the most challenging thing to do, but it is not.

The many numbers you will see, which bring about the concept of complication are Cartesian coordinates showing the different positioning areas.

The G in G codes signifies that a command is about to be given. Every command has one G code to prevent confusion. Some of the common commands that you are likely to come across include:

With This Information, We Can Now Try and Interpret Code

The G shows that a command to move is about to be issued. In this case, a G01 command is given to move in a straight line at a set speed.

The X, Y, and Z values show the position the machine has to move. F, which is the feed rate, gives the speed.

What is The Importance of Having a Trained Operator for your CNC Machine?

For a CNC machine to effectively cut substantial parts, a software coordinating the various factors like cutting, shaping, and speed rate is not the only important thing but also an experienced operator who understands how to use G codes.

Thus, this has been a point of conflict for some time. Most people think that since the software already has all the predetermined variables necessary to cut the materials, all an operator needs to do press a button. The program does its magic.

This notion works most of the time. There are, however, instances where things go wrong, and an experienced operator becomes a necessity.

When A CNC cutting program receives a command, it follows a step by step methodology to make the perfect cut.

It may sound as pleasant, but it is not always a good thing because it takes a very long time for the program to prompt the machine to cut the material, especially when it encounters a complicated optimization program.

In addition to conducting the operation much faster, it is more comfortable with an experienced operator who understands the right combination of commands to give the machine tool to produce a cut that meets the customer’s expectations.

The probability of the software making an error or creating a program that needs to be adjusted also exists.

An operator may identify that a cutting program will produce a cut that is not as per the set expectations. If the operator understands how G code operates, they can make small adjustments to the commands made and produce a high-quality cut in little time.

For an operator who does not understand how to modify the specific G code commands with the problem, they will be required to program the whole set of instructions again, which will take a lot of time.

Importance of using G codes in your CNC Machines

If you have a company that deals with the rapid production of tools either through rapid tooling or prototyping technology, then you know that new designs of tools come up every day.

To be able to meet the market needs and provide quick response to your customers while at the same time reducing your financial exposure, good knowledge of CNC and G codes, which are its language of operation, is mandatory to enable you to excel.

Using the CAD-CAM software to generate G code programs has been done for around thirty years now, and at that time, it has been an enormous relief for many manufacturing industries.

In addition to producing accurate cuts, it has also increased production efficiency and significantly reduced the production time while maintaining strict tolerances.

G-code plays a major role in the manufacturing industry. The car industry can attest to the importance of G-code and how work would have been tiresome.

Some of the workloads have been reduced with the introduction of the G-code.

Even though most factory robots being able to auto operate manual supervision is still needed. Other manufacturing companies are also rapidly adapting machines run by G-code because it is the future. Despite fears of people being replaced by machines and leading to unemployment, more skilled laborers will be needed to supervise and operate these machines.

Hence G code operations are here to stay, and companies will have to adapt to operate G code run machines because of its efficiency.

The Basics of a CNC Wood Router

How Much Does a Wood CNC Machine Cost?

Can You Really Make a DIY CNC Machine?

The Basics of a CNC Wood Router